The intoxicating R&B anthem features breakout artist Nija, who showcases her trademark sultry vocals. Grey, who previously bent the ears of fans around the world with the player’s anthem “Gyalis,” shows a more introspective, vulnerable side on “Confujawn.” Listen HERE.

The rich melodies and sensual vocals of “Confujawn” prove Grey has songs for everyone. If “Gyalis” was a take-no-prisoners club anthem, “Confujawn” finds the rising star showing a mature approach to a rocky relationship.

“Uh, you block my phone
So I pull up
Argue a little then f—k, it’s toxic Like what we doin’?
No more games, we gettin’ older
I told you no more lookin’ over my shoulder, that’s over,”

Check This Out!
– Capella Grey

The track’s video opens with a frank conversation between Grey and Nija about the way they relate to one another. They eventually decide to make the most of a long night out in Los Angeles, which is captured in moody, stylish lighting while they trade verses.

Each of the artists has been on the rise over the past few years. Nija has proven herself an accomplished songwriter and an emotionally affecting singer nominated for three Grammy’s. . Since kicking off her career in 2017, she’s written for Cardi B, Summer Walker etc etc , and most recently Megan Thee Stallion and Dua Lipa’s new single “Sweetest Pie.” ….. Now at 24, she’s come into her own as a solo artist with her acclaimed debut EP, January’s Don’t Say I Didn’t Warn You.

Grey, for his part, has created a fresh, yet nostalgic R&B sound that invites listeners across generations. With the runaway success surrounding “Gyalis” — over 300 million combined streams, No. 1 at Urban Radio, No. 38 on the Billboard Hot 100 — it would be an obvious move to double down on that formula. However, Grey isn’t your typical artist. With “Confujawn,” he has created a song as instantly catchy as “Gyalis,” but from a completely different angle.

Though he’s newly signed to Capitol, the New Yorker has been establishing himself as a singer, songwriter, and star the past few years. With “Gyalis” and “Confujawn,” those days of relentless grind as a cab driver are starting to feel like a distant memory.

Grey hit No. 2 on Billboard’s Emerging Artists chart, scored BET’s Amplified Artist of the Month in December, and also made it onto Billboard’s 15 Hip-Hop and R&B Artists to Watch in 2022 list. Success isn’t easy to come by, but now that Grey is here, he’s showcasing the many ways he can craft a winning single while working on his debut project set to release soon. 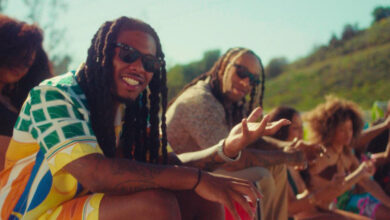