Multi-talented artist and producer Namir Blade is due to release his highly-anticipated album Metropolis on June 3rd via Mello Music Group.

Recording, producing, and mixing the album himself, Namir reaches a defining moment in his career with Metropolis. Along with the album announcement, today, Namir drops the album’s first single. Produced by Namir himself, “Ride” is a high energy track with a catchy hook. The song is about appreciating your old car no matter the condition as long as it can get you around. Namir explains, “I wanted to write a love letter to my car and an anthem for anyone pushing a car that can at least get them from point A to point B.”

The inspiration and name for the album comes from 1927 silent film Metropolis as well as the 2002 anime version. Namir explains, “Despite it being a silent film, I felt like it was able to provide an in-depth look at the ramifications of technologic and perceived infrastructural advancements on urban society at large.” He continues, “I discovered themes of classism, civil unrest, and an overall uncertainty in a bright future. These are all themes that I identified with as a black man living in the United States.”

Namir recorded, produced and mixed the album all from his living room, making it his first completely self-produced project. Metropolis brings out a new level of vulnerability in Namir’s songwriting as he deals with themes of loneliness, assimilation, self doubt, joy, suffering, social decay, and vanity in an ever-changing world where technology reigns supreme.

With Metropolis, his third project on Mello Music Group, Namir Blade finds the perfect balance between his previous releases Aphelion’s Traveling Circus and Imaginary Everything. In addition to showcasing his talent for rapping, the album is a testament to how far Namir has come as a beat maker and a producer. Metropolis is set to drop June 3rd on Mello Music Group. 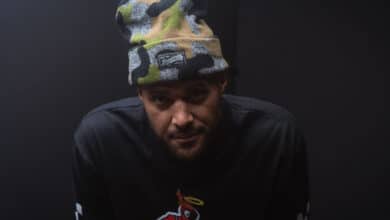