Since his tragic passing, Tupac Shakur’s music had been released over the years. In fact, there has been more posthumous album releases then studio albums for Tupac. One of those posthumous albums was released in 2006, ‘Pac’s Life’, featured “Untouchable.” The song produced by Swizz Beatz, also features Krayzie Bone of Bone Thugs-N-Harmony.

Now more than a decade later and the song appears on Netflix’s “Red Notice.” Starring Dwayne “The Rock” Johnson, “Red Notice” is currently available for streaming. The “great one” stars as an FBI agent who reluctantly teams up with a renowned art thief (Ryan Reynolds) in order to catch an even more notorious criminal (Gal Gadot).

“After the fire comes the rain
After the pleasure, there’s pain
Even though we broke for the moment, we’ll be balling again
Time to make y’all, my military be prepared for the busters similar to
Bitches to scary, get to near me we rush ’em
Visions of over packed prisons
Million’s of ni–as thug living
Pressure’s, three strikes, I hope they don’t test us”

Check This Out!
Tupac, ‘Untouchable’

The Rock is also familiar with Tupac Shakur. Recently Dwayne Johnson shared a video as he worked out to Tupac’s “All Eyez On Me.” Over 279 million followers watched The Rock bench press 120 pounds of weight as Tupac’s classic song played in the background.

As The Rock explained back in 2018, Tupac Shakur’s ‘All Eyez On Me’ song was his first entrance music, “My very first match in the company in front of about two hundred people, at a flea market, ‘All Eyez On Me’, this was my ring music.” The promoter suggested to The Rock to not use the song due to the language. “After the match the promoter came to me & was like “Dee, you can’t use this music! Theirs kid’s out there, theirs a lot of motherf–ka’s in the song and N words”, I was like well I’m sorry to tell, I gotta’ be me, I have integrity and if I go out there then this is my ring music!”

With The Rock’s job on the line, he quickly ran to find a clean version of the iconic song. “I found the radio version of ‘All Eyez on Me’ kept my integrity. The bottom line is always be you, always play chess when everybody else is playing checkers, always play the long game! All Eyez on Me!” (Watch here) 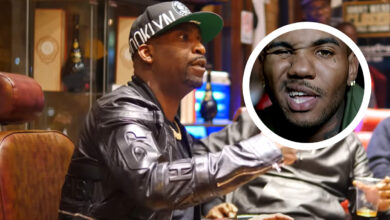